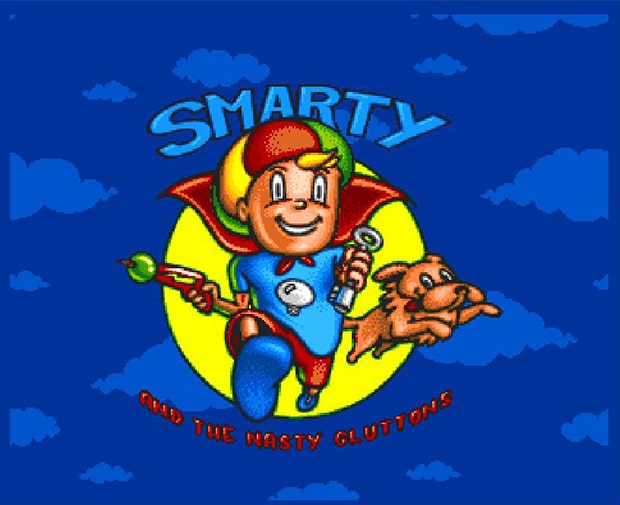 Dear friends of the Amiga and retro-gaming,

We are most delighted to release the full version of Smarty And The Nasty Gluttons (c) 2020 Eero Tunkelo. The development of the game started back in 1992 but was halted after a few years due to difficulties in finding a publisher for the game – partly related to Commodore losing it’s share of the home computing market.

Approximately 25 years passed and a long hidden preview was cracked and released by Jouni ‘Mr. Spiv’ Korhonen and Eero Tunkelo, the copyright owner. This inspired a gathering and the idea of completely wrapping up the project and releasing a full version in ADF format.

The journey since then has been most incredible and fun. All the source code has been reviewed line by line. Many bugs have been fixed (while some new most likely created) and many features have been either finished or even enhanced. Parts of the code had to be completely re-written.

All the graphics and music were finished already in the nineties. This release also serves as our tribute to the highly talented artists we had the pleasure to work with and their wonderful contribution that we still admire so much.

We are planning to release the source code and related binaries as an open-source project – probably in the autumn of this year. There are also plans to create a purchasable product box including a floppy disk version of the game.

For more information about the game, please contact us

The game is best played on real 68000-based OCS Amigas with minimum 1 MB of RAM and Kickstart 1.2 or better, although, a modest attempt has been made to make the game work on better Amigas as well. Some of the odd implementation decisions are included in the game because they have been on the bucket lists of the developers since nineties.

We hope that this release may bring joy to anyone who shares our passion for the Amiga and retro-gaming. We have certainly enjoyed bringing the game to you. It is great that there still is an active community that appreciates the fun and beauty of the Amiga and it’s era when home computing was the best fun imaginable. 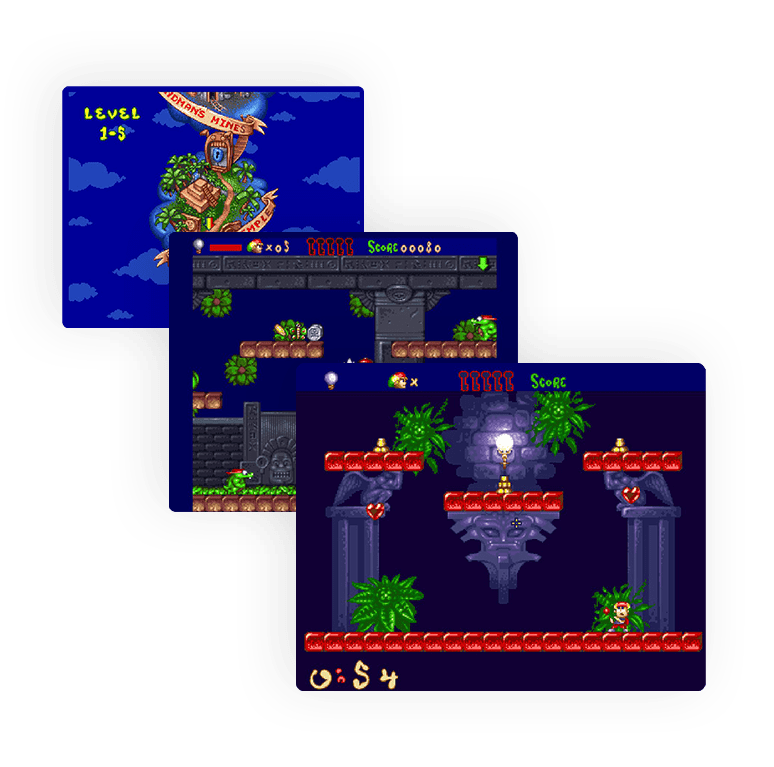 Smarty is an 11-year old schoolboy whose grandfather is a wise and creative scientist. Smarty likes to spend his free time in Grandpa’s laboratory experimenting with all sorts of ideas and gadgets. Smarty has a dog called Slurpy who is his best buddy – besides Grandpa. Smarty also plays the saxophone but he often finds daily practice less interesting than something else.

One day Grandpa makes a huge breakthrough in his lab. The dream machine he’s been obsessed with for years finally works! With the machine, Grandpa has the ability to enter other people’s dreams. He’s planning to use this power for helping all those suffering from sleep disorders.

But then unexpected bad things start to happen. Dr. Nightmare – Grandpa’s archenemy and a less capable but highly vicious inventor – breaks into the lab and steals the dream machine while taking Grandpa into captivity. Then Nightmare uses the machine to take both himself and Grandpa into the dream world where he’s aiming to use the machine to control people’s dreams and ultimately gain control of people’s lives.

Smarty managed to hide behind some chemistry equipment while witnessing everything. Seeing Grandpa and Nightmare vanish into thin air with just a flash of light and a roaring sound, Smarty immediately realized what was going on. Luckily he has the rare capacity of lucid dreaming which enables him to function in the dream world equally well as in the realm of our daily lives.

Later that night, after falling asleep, Smarty is equipped with Grandpa’s Inventor’s Hat and Hypno Zapper and also gets accompanied by his best mate Slurpy. All set, the company embark on an adventure with a single purpose: rescuing Grandpa and stopping Dr. Nightmare from gaining full control over the dream machine. However, hideous as only he can be, Nightmare has not left the path leading to his secret chamber unguarded. This is where the player steps in and the game begins. Good luck!

Smarty And The Nasty Gluttons – An Amiga game
Made in Finland during 1992-2020 and released on July 31st 2020
Copyright 2020 Eero Tunkelo
For more information and contact info : www.smartygame.fi

We noticed an occasional crash with level change with the latest WinUAE 4.4.0. With version 4.2.1. there are no problems. We will look for a solution to this. Sorry for any inconvenience.

This game is released as free software. You are free to play, change and spread the game as you wish as long as you are not attempting to gain any profit doing so. If you would like to make commercial use of any part of this game, you are welcome to discuss it with Mr. Tunkelo.

These days most floppy disks and drives are old and prone to r/w errors. In case of a sticky read error, the game will halt to a rainbow colored background and you’ll have to reboot.

When run from a floppy disk on a real Amiga, the game features a saveable hi-score list. You may skip this by write-protecting your disk. If a write error occurs while saving the list, the game will halt to a warning. It means that the data on the track in concern is likely ruined and you’ll have to make a new game disk. 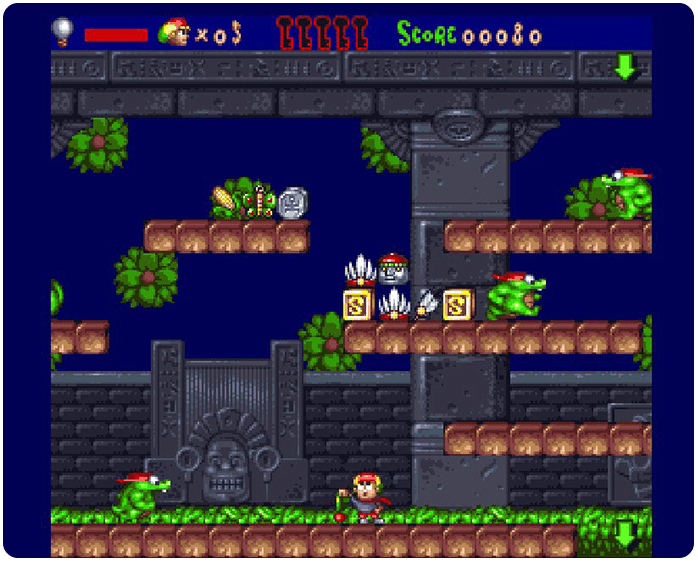 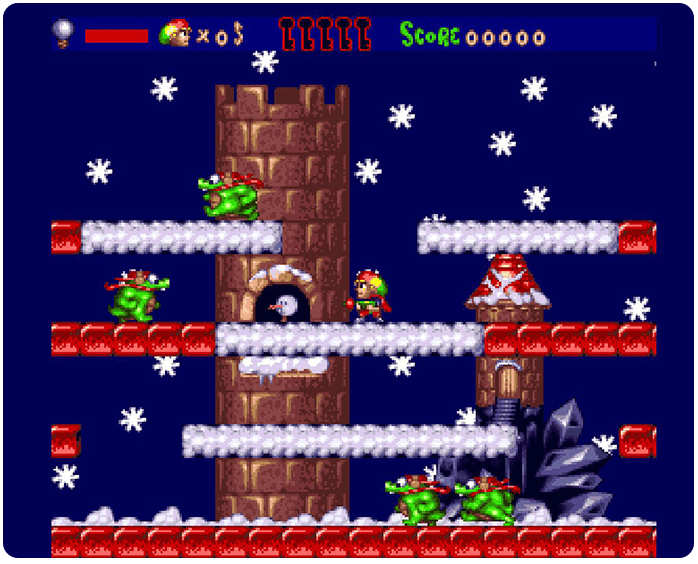 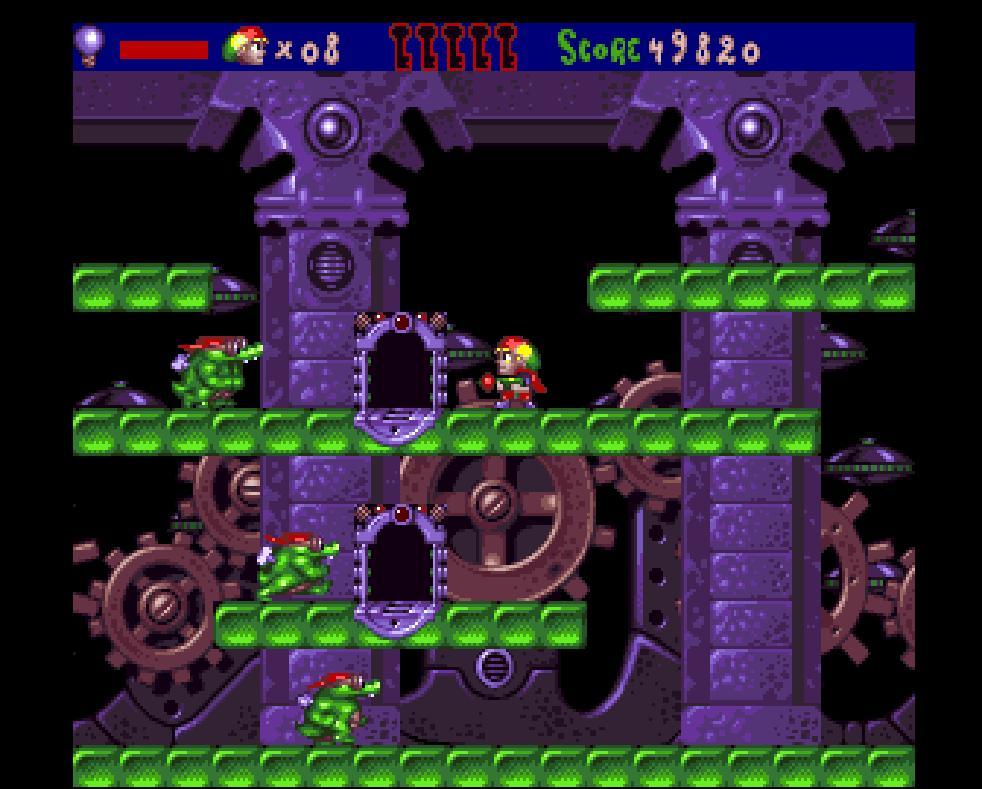 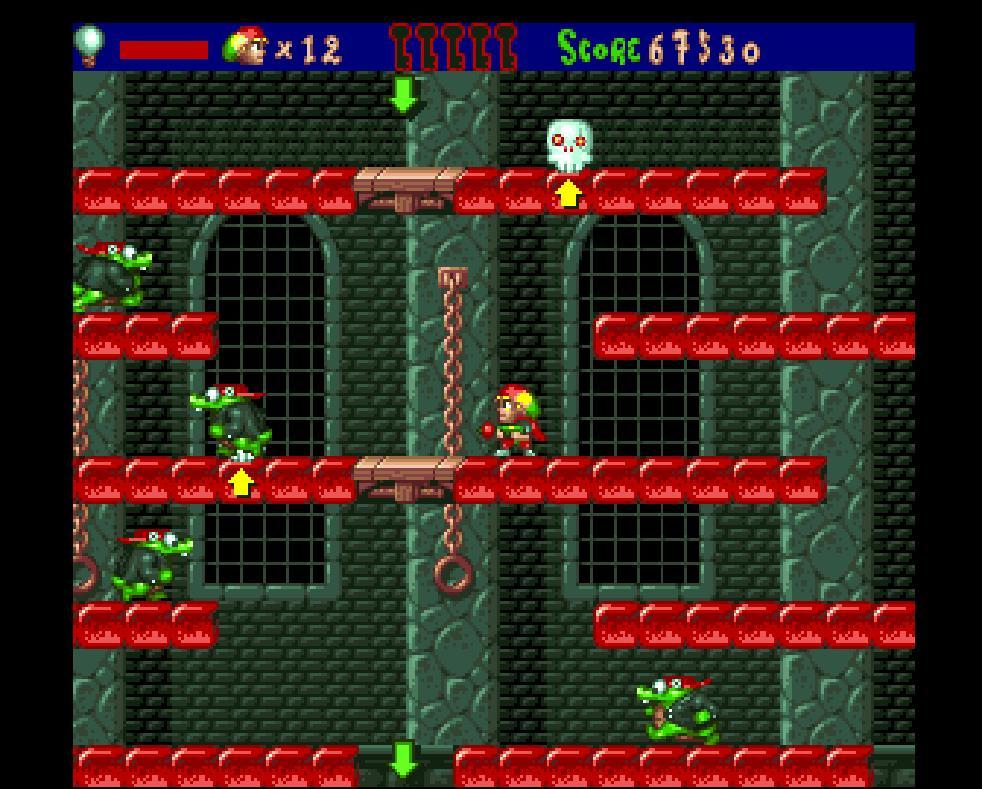 The development of the game began in 1992, when a Finnish software company Avesoft and it’s head designer Jyrki Kummola hooked up with Eero Tunkelo in order to start realizing a vision of a chase-and-run style platformer Jyrki had been planning for some time. Eero and I had some discussions about the project and I quickly joined the team. Some graphics had already been drawn and we started coding straight away.

Jyrki had a great vision about the characters of the game and the story behind them. What remained a bit unclear, however, was the aim and plot of the actual game itself. After realizing that the first draft was difficult to grasp and somewhat uninteresting, a new approach was taken. One of the artists, Mikko Lipiäinen, and myself were at that point pretty much the only ones who had the time and motivation to try a makeover of such a large scale. Somehow we managed to pull it off and after many months we had a new version with clearer aim, smoother gameplay and a new graphic design.

The graphics, music and sound effects were crafted by highly talented friends among the Finnish Amiga scene. Hans Zenjuga had drawn the original graphics and also made a great contribution to the revision. Mikko was totally irreplaceable with his multi-talent in design, graphics and sound as well. Music for the game was composed by Sami Järvinen, Juha Kujanpää and Aleksi Eeben. Sound effects were made by Aleksi Eeben and Ville Hyvönen.

We also had help with the coding. While Eero and myself worked on the game engine, the disk and sound system were done by Jouni Korhonen and Jarno Paananen, respectively. We simply could not have made it without these guys. Besides Jyrki’s strong vision, we received great practical support from Avesoft’s CEO at the time, Kimmo Kujansuu.

By the time we had a playable preview and the game was about to be wrapped up, it was already mid-1995 and the Amiga had just started to go downhill. We tried to get a publishing deal for the game but didn’t succeed. That sort of stopped the development and the Amiga version was left unfinished.

There were efforts to port the game to 80×86 machines. A great deal of work was put in by Hirvikorpi brothers, but at some point the task started to seem overwhelming and PC gaming was going to a completely different direction with 3D graphics and so forth. Therefore the development of the PC version also quieted down.

Many years passed. Eero had acquired the copyrights of the game from Avesoft’s heritage. Jouni, who had been somehow attached to Amiga scene all this time, found a disk with a playable preview in it from Eero’s old stash of disks and – with Eero’s permission – cracked his own code and released the preview. This encouraged me to contact Eero after a long time, and then the idea of finally finishing the project came up.

I hadn’t done nearly any coding for twenty years, but got really interested in it again – and also rediscovered the fun of it! I happened to have the time to spare into finishing the project. So I decided to relearn the 68k assembler and Amiga hardware. After some studying of the code, I realized that it was pretty sloppy – written by hasty and youthful minds. Therefore I decided to review it line by line. While making myself again familiar with all the details of the game engine, I tried to do some optimizing, debugging and improvements as well.

Jouni’s help has been invaluable throughout the Project Comeback. After the break he had dug out improved versions of his old packer routines and had also refurbished an old DOS-based loader to be used with Amiga Disk File format and the “new old” packer. Besides that, he has patiently answered my frequent questions about Amiga hardware and coding. Thanks a million, buddy!

Until this day, I haven’t stopped marveling the talent and effort of all the people involved in the project. So many hours of hard work have been put into this game. The finishing touches on the code in order to wrap things up for good are my tribute to all the wonderful friends with whom I’ve had the pleasure to work with and share the fun and beauty of the Amiga. Thank You!

Special thanks to Ville Jouppi for play testing with an unbeatable selection of different hardware combinations.

I hope that this game will bring joy to the friends of the Amiga and retro-gaming still out there. I would also be most happy to receive comments, questions or any kind of feedback. (Contact.)

This project has given me a whole new meaning to the word ‘release’. 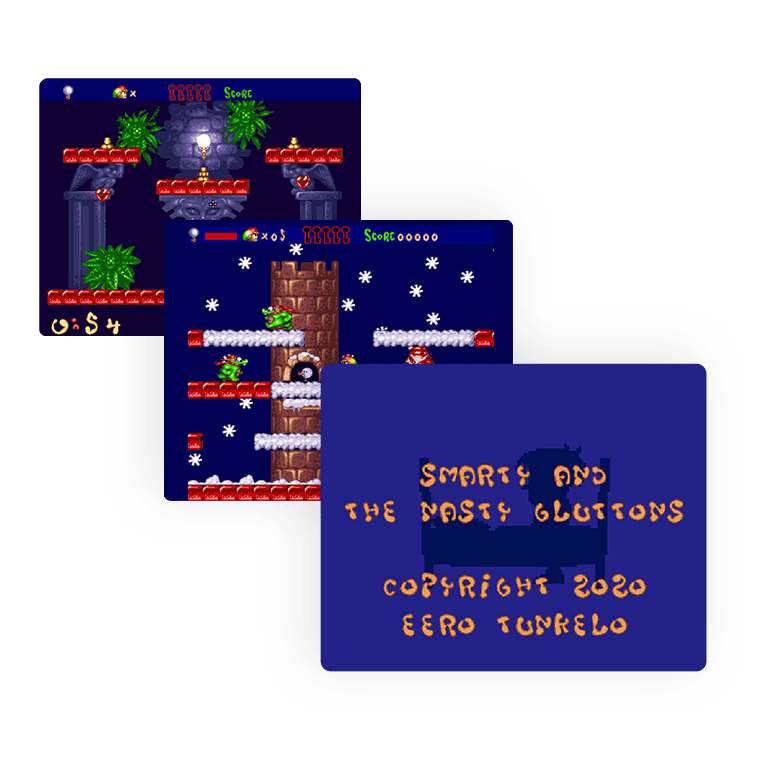 We are happy to announce that the boxed version of Smarty and the Nasty Gluttons is getting ready for publishing. Estimated to be released in February 2021. Stay tuned!

Dear friends of the Amiga and retro-gaming,

We are most delighted to announce an upcoming release
the full Physical box – version of
Smarty And The Nasty Gluttons (c) 2020 Eero Tunkelo.
The release is estimated to happen in December 2020.